Selectivity Pays Off. How Many People Are You Saying No To Through Your Speech? 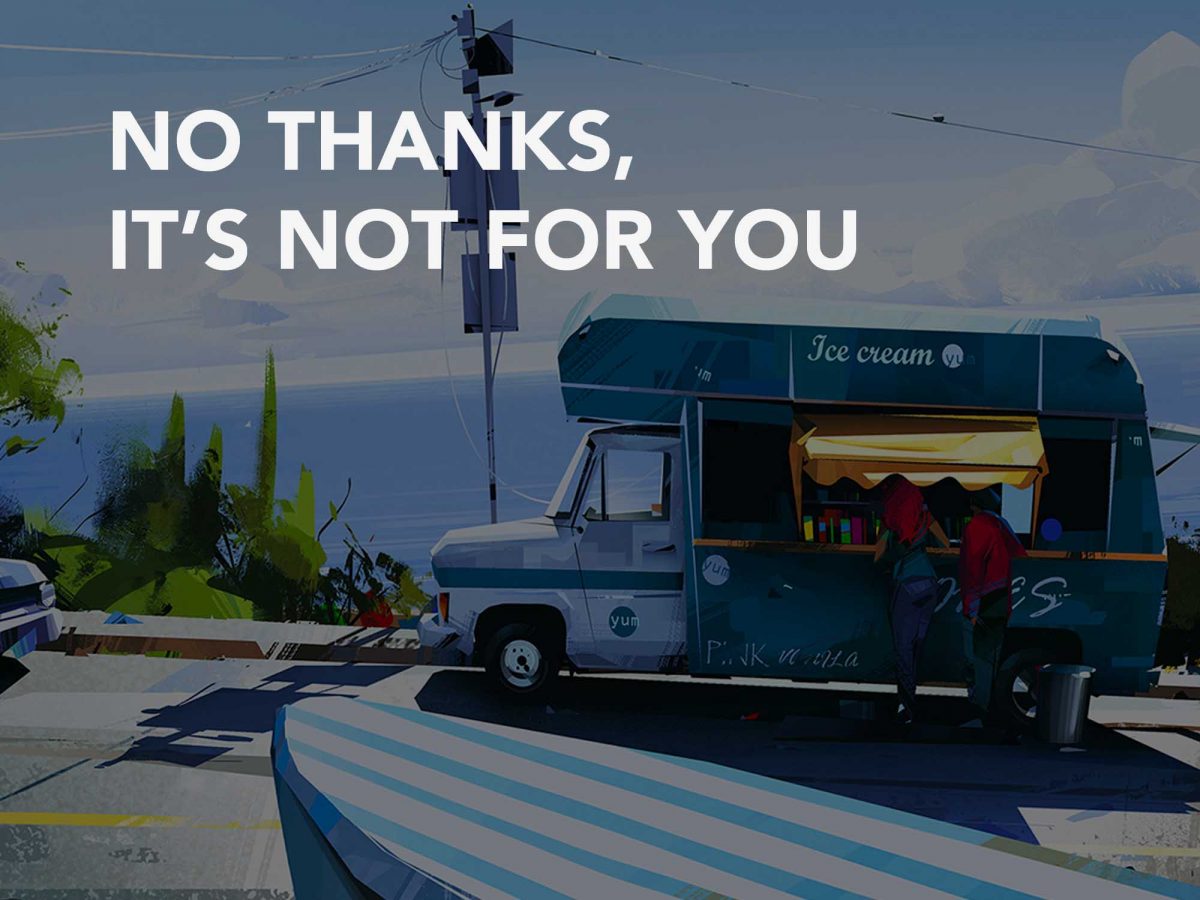 I mentioned yesterday that I’m advocating towards talking directly to your user. That’s no news but I’ll see what I can add to go one (or maybe more) level deeper, give some more value.

Assuming the idea speaks for itself, my input would be on why that matters. Much like anything I write, I think it’s about the mindset. And I’m not saying that in a “motivational speaker” way, not in a “engineer your life to be a masterpiece” or whatever kind of bullshit.

It’s about the mindset for this very reason: because of school, university and what not — the educational system in general — we have a tendency to look for how-to lists. Or for a step by step guide. Even if you’re a dropout, this still applies. Things around you are built by people who have been through the educational system — that’s statistically speaking.

It will affect you, whether you like it or not. But here’s the problem with it: when you follow a step-by-step, there’s no reasoning behind it. Sometimes it happens — which is when an epiphany occurs.

“You’re rambling Daniel, what are you talking about?”

Say the usual film scene where a guy asks for advice from the alpha guy on how to attract a woman. The “student” asks “What can I say to her to attract her? What’s a pick-up line?”

Why? Because it’s his mindset that’s not fixed. Indeed, it’s the long-term shot to work on your mindset.

The point of this parallel?

When one reads “Write directly to your user” or “Do A/B testing” or whatever some successful guy said, maybe it’s time to look at the reasoning behind it. Because otherwise, we’re just like the helpless guy trying to attract a woman who’s only failing in the next second.

And here’s where I really get into my point today: the reasoning behind “write directly to your user”. It’s simple: selectivity. Now, when it’s put out, you might not agree with it. The natural tendency to serve everyone might kick in. Why would I be selective?

“Why would I say no to potential customers?”

It leads back to questions like why would I spend time doing non-scalable things such as getting in touch 1-on-1 with my users?

The answer to both selectivity and non-scalable things is the same: impact. When you’re being selective, the impact is at least tenfold. If not more — that’s up to you.

Motivational folks would pack this concept up with some catchy rhyming quote like “focus is pocus” — I really forgot what that quote used to be but I promise it was both rhyming and rememberable.

But motivational folks won’t spend the time to explain the thinking behind doing that because it doesn’t align with what they sell. Which is why what I’m writing right now is not for the masses, for the public — it won’t get you off your chair. In fact, it’s very likely it might be a hit, depending on much you’re opposing the “I don’t want to serve everyone” idea.

If you’re never saying no, your yes is pretty much worthless. And that applies to business, customers, users, clients etc. as well — whether they’re paying people or not.

Remember the wealth management platform example given yesterday? That’s not something millennials are likely to use. So not only they’d refrain from putting up emojis and “cool” terms but they’d use what the young ones would call boring and dull.

If, on the other hand, you’re doing something for millennials like the Puggerfly was meant to be, then you might be into emojis, gen-Z slang, a lot of acronyms and what not. Moreover, Three (the mobile carrier) is pretty much oriented towards them. Their plans offer unlimited bingeing on Netflix, Snapchat etc.

Speaking of them, here’s how the screen time analysis of a gen-Z iPhone user looks like, should you be interested.

Mind you, that’s a weekly average. It wasn’t just a random day where the young person was rather lazy and preferred staying on her/his phone.

The Tinder for Muslim people will talk differently than the actual Tinder. one is called Minder by the way — in itself, because they are so focused, they’ve forced themselves to speak directly to their audience — which I think is a good thing.