How To Find The Best Name For Your SaaS Company 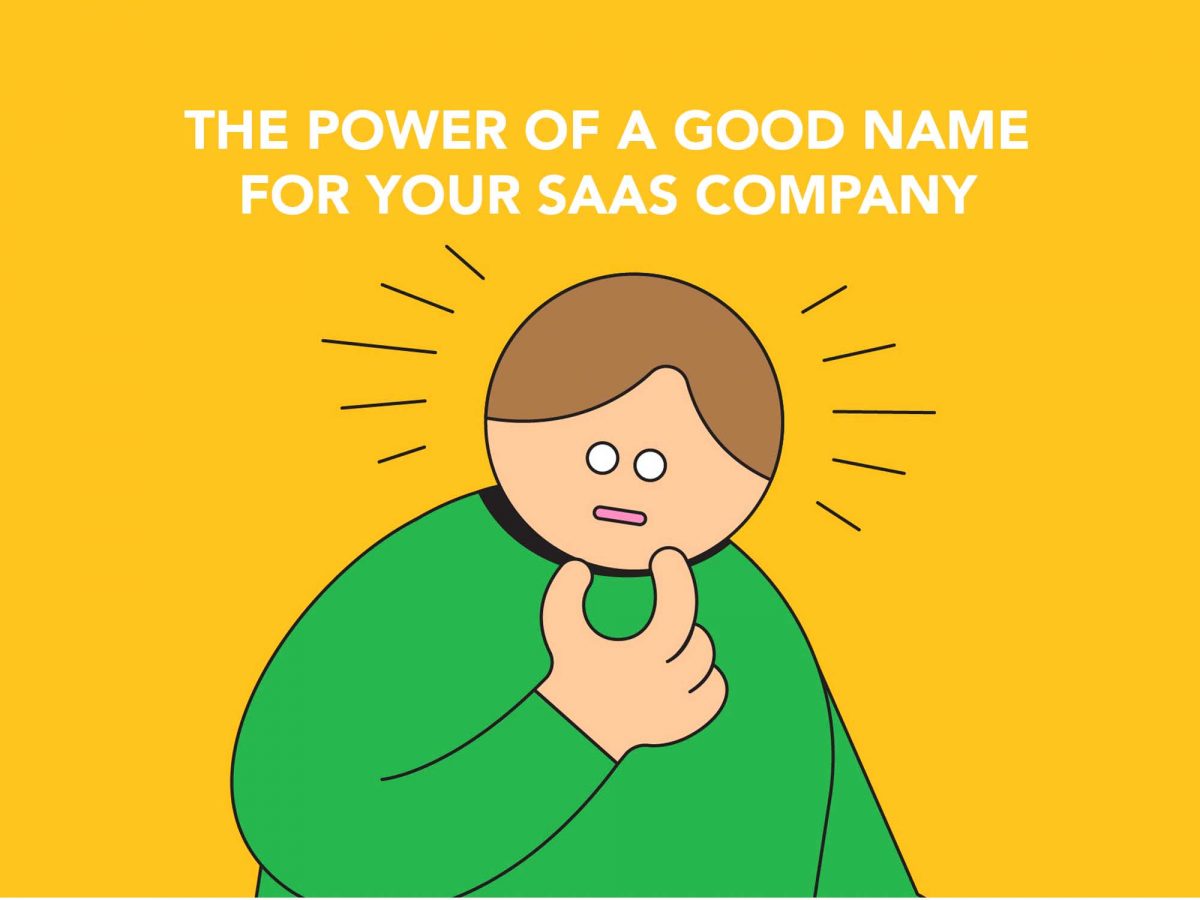 You know that feeling: what freaking name should I give my SaaS company?

You probably want a name that will:

And then you might even make a list (mentally, if not written down) of names you like that do that. You say “God damn, Salesforce, yeah, that’s a wonderful name”.

The problem and the solution

This overthinking process can go on and on and on for hours. I won’t replicate the hours in this article because here’s the deal: the solution lies in the mindset.

Any business-seasoned person will tell you name doesn’t matter as much as one might think it does.

Unless you pick some controversial or offending name like “swastika”, it won’t matter that much. The best example of this is craigslist.

Not only because of the name but also because of how the website looks. The point here is that:

People will “forgive” not being spoiled with design and/or a nice catchy name if they get value out of your product.

Cragislist never needed cool design and the name is also very personal — not even tied to a personal brand, we don’t all know who Craig is.

If we are to be pedantic, it’s not grammatically correct. I know, it’s limited to be spelt like this because it’s a domain, but the headline is still “craigslist” not “Craig’s list”. It’s written in Times New Roman, uses grey and blue, no fancy shadows or colorful gradiented images.

Why can they get away with that? They provide value, which is what you should be looking to do in the first place as well. Why?

Now, I’m not saying they don’t matter at all — part of what I do for a living is designing them. Yet I’m telling you they’re not as important as we tend to imagine in the beginning.

And I don’t want to leave the discussion at the abstract level, let’s get into practical.

How to find a name? 6 pointers

Before you go into it, I’d look out to make peace with the idea that it doesn’t have to be perfect. After that, here are some pointers that can help.

1. Pick one: short, easy or simple

I’ll start with some classic advice. Keep it either short, simple or easy. If one is ticked, the rest can go. Salesforce is not a simple name to come up with, neither short. But it’s easy — easy to remember, easy to write.

They had $10B in revenue last year and I can tell you, it wouldn’t have been $15B had they chosen the name “Stripe” before Stripe did.

Another example: think law firms. Picking 2 surnames is simple. Not short or easy but simple. You wouldn’t name a SaaS “Pearson Specter” but that’s a case of a simple name (from your perspective i.e. it doesn’t take a long time to come up with it). As for short, I don’t need to explain that.

Rome wasn’t built in a day, they say.

And what we can infer from that is that it also wasn’t planned the way it turned out to be since day 1 — so you can’t really encompass the whole deal of what your company will eventually from day 1.

Nike doesn’t encompass any shoe. We started imagining shoes later on, as soon as we heard the name. Microsoft or Google don’t do that either.

However, I got something that’s very helpful for you if these conditions are met:

If these three are checked, you can look within yourself and find out why you’re making the product/company. There’s an underlying reason.

Your startup might be offering shared rides today but is actually about making transportation cheaper than owning a car — that’s Uber’s mission. To make it uber cheap. No, they didn’t think of that, you and I might do now just like the Nike-shoes analogy.

But the name (or even logo) can encompass a mission that’s long-lasting. Take a project we’ve done — Alter. It’s about getting clothes tailored in the beginning. But if the company lasts for 20 years or longer, their deep fundamental idea is to eliminate the problems around measurements.

The consequence? The logo is not something about the proper fit of a shirt, which is something that can match the company’s outputs in the first years. Then, some years down the line it could become just “the story of how we started”. No, the logo is showing a measuring tape, because that’s what they are about: measurements.

The same idea can be applied to a name. Think not in the long-term, but in the company-lifelong-term.

The name should be the period at the end of a sentence, not a comma. Meaning: the comma would imply that the name explains what you do. I’m saying it’s the period because it just accompanies the explanation of what you do, not necessarily explaining.

Hence, there’s no need to have to come up with a genius name like Chargify just because you deal with charging people. Their name is good but it’s not what makes or breaks a company.

So please don’t get attached to explaining what you do through your name. I’m getting back to my previous point: if anything, link it to why you’re doing it.

Here’s a question that can aid in finding an answer: what’s the most noble problem you can aim to solve?

That, in fact, should be why you start a company for the long-term. To answer that question. It will give you meaning in life, save you from the “I made this company to make money and now I’m feeling miserable” loop and keep you sane.

Personality can either mean:

Don’t be afraid to do any of the above. Again, it won’t matter as long as you’re not offending anyone and providing value. I’m repeating what I said in the beginning because it’s the essence of the article.

5. Something you can fall in love with

It might not be the greatest name but you can fall in love with it later. It’s a consequence of thinking in a “longer than 3 years” direction. You’ll hate the name if it’s outdated, i.e. it meant something in the beginning but now it just sounds jovial.

As long as you can imagine yourself or other people loving it once it become a bigger thing, then you’re good. How do you know that can happen? My next point.

6. It has some meaning to you

If it’s got some meaning to you, then a story about the name can come at a later point. The idea that Apple was called so because it was meant to be placed before Atari in a phone book is a nice story.

Why? It got some personality. We like stories about successful products — only after they become successful, it’s true.

I believe one can only be successful. Yes, you can “become” successful if you choose what success means based on external factors (i.e. you let others tell you). Yet you can be successful at this very moment.

But because you do (create) at this very second. And the name of a company is just a moment in time — pick whatever has meaning to you then. The name Apple made the two Steves successful at that very second because they were building and enjoying every second of it.

Pick something with meaning to you or to someone. The story can come later, when it becomes successful.

“Ok Daniel, I get what you mean. But why would I do all these things and not spend a lot of time choosing a name?”

Here’s probably the highlight of this written piece:

Names, logos and even colours some times are not museum pieces — only those are to be debated for long periods of time. If they were, minutious aspects would matter.

They are part of a business, so the most important thing that matters is speed. We’re psychologically prone to overthinking since we’re analytical people. What can we do about it, though?

Making a decision in 1/10 of the time you would usually reserve for thinking about it is faster than:

What I’m saying we should be doing is:

So that’s why you should not spend more time than needed when picking a name. Because of a need to move fast.

It’s not a museum piece, it’s a business. Go fast, pick one of the 6 pointers that make sense to you — and those that you feel within yourself to be true — and you’ll be on your way.